The calls of Warboss Skarblitz had been heard and the Orks had gladly went to battle to the sounds of drums. But in the shadows, another force was awakening and getting ready to pour rivers of any blood in the name of their Dark Gods. The entities from the Warp craved for sacrifice and destruction: Abaddon, Warmaster of Chaos, was not one to refuse them their tribute. Orks, Eldar, Space Marines: whoever was willing to be the primary material of the satisfaction of the Ruinous Powers didn’t really matter: Chaos had to prevail. And Abaddon spoke to his legions, and there was War.

Abaddon has decided to bring hostilities to a new level of bloodshed and Chaos is about to devore hosts of people. Will you hear his call and be a loyal servant of the Dark Gods? If you do, then why not stand out in the middle of melee with the Abaddon War Pack? It includes the Zealot weapon and armour pack(for the Chaos Space Marine faction) and 10,000 RTCs to customize your warrior furthermore. 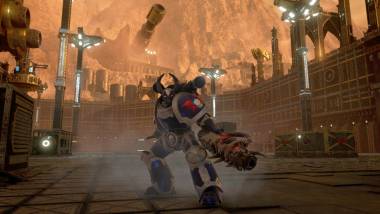