Not So Middle Ages review

Not So Middle Ages is a text quest where you play as a simple cubicle rat who has traveled back in time. Your hero knows nothing and can't do anything, but he got his smartphone with Encyclopedia of Applied Recipes installed on it. Build advanced (by medieval standards) devices to amaze the villagers and even to alter the course of history. But remember, the battery goes down as you use your phone, and there is no way you can recharge it... Unless you build a voltaic pile.
You've traveled 700 years back in time. What kind of people you'll meet here? Can you trust them? And do you have a chance to go back in your time? It depends on the choices you'll have to make!
The year is 1358. The Republic of Venice faces serious troubles - Dalmatia is lost. Meanwhile, the Swiss cities fight against the Austrians, and the Austrian sovereign refuses to obey the Holy Roman Emperor and proclaim himself the Archduke – almost a king! How will the story go with you being in the thick of events?

The storyline splits into multiple branches, allowing you to choose. After the awakening in a shabby Alpine village you start to become known and get involved in the epicenter of intrigues. As a result, you can end up in:


Your choices affect the future: there are multiple possible endings in the game, that directly depend on what you'll choose!
The knowledge of new technologies is in your hands - use it to create the greatest inventions in history anew. 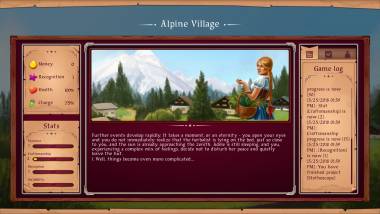 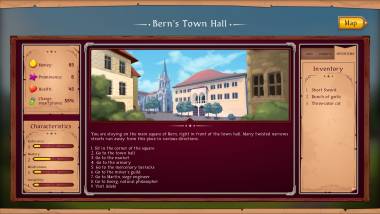