Dinosaurus Life VR is the world’s first Jurassic Safari Park (is it really ?). Discover an island full of famous dinosaurs such as Argentinosaurus, Stegosaurus, Pteranodon (even if it’s not a dinosaur), Tyrannosaurus, and so on. You can admire them, learn about them and interact with some of them.

Dinosaurus Life VR features more than 20 species of dinosaurs, from the smallest theropod to the biggest flying reptiles that the planet has had. Its paradisiac island is a pure sanctuary where you can explore the life of these extraordinary animals that ruled the planets for millions of years.

Each species in the park has a complete narrated information page to teach those who want to increase their knowledge.

Dinosaurus Life’s animals live with autonomy, sometimes they fight, most of the time they eat, drink and sleep. Almost all the animals are animated with life-like behaviour (that we know so far). They will be always around the same place in the island, but their behave will be different each time you will visit them.

Dinosaurus Life VR also provide interaction with dinosaurs. Who has never dreamt to play fetch with a T-Rex ? Well, now you can. You will also be able to feed the biggest herbivorous in history! 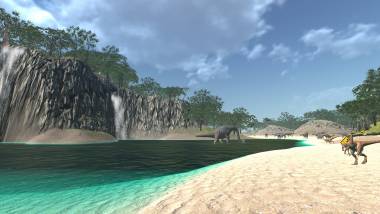 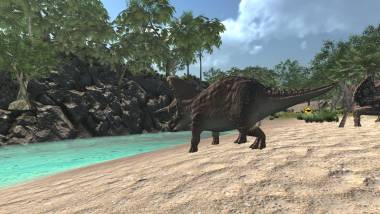